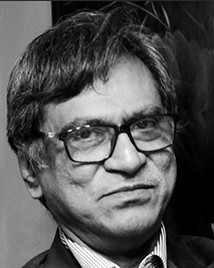 Kaiser Hamidul Haq (born 7 December 1950) is a Bangladeshi translator, critic and academic. Known for his translations from Bengali into English, Haq is a recipient of Bangla Academy Literary Award (2013) in the category of translation. He is a former professor of English at the University of Dhaka. In the liberation war of Bangladesh, he fought against Pakistani Army “as a freshly commissioned subaltern in command of a company”.
Haq passed SSC from St. Gregory the Great High School and HSC from Dhaka College. He then enrolled into the English Department of University of Dhaka for his BA and MA degrees. He immediately joined the faculty of the same university. After he received Commonwealth Scholarship he moved to England to complete his PhD from University of Warwick in 1981. He continued his research as a Senior Fulbright Scholar and Vilas Fellow at the University of Wisconsin–Milwaukee.
After he returned to Bangladesh, he joined the University of Dhaka faculty and went to become professor. As of 2015, he is on leave and is teaching Modern Poetry and Creative writing at University of Liberal Arts Bangladesh. He is also teaching part-time at the universities which include BRAC University, East West University and North South University.